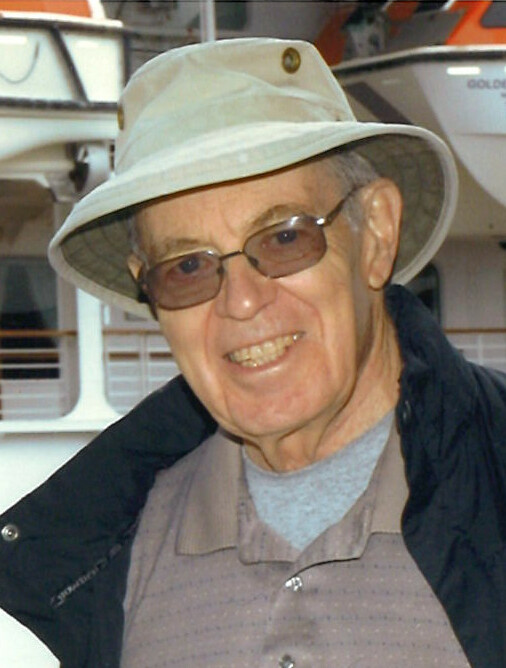 Please share a memory of Donald to include in a keepsake book for family and friends.
View Tribute Book

Google the name Donald Kent and images and links to his work as a geologist and football official appear.  This wonderful husband, father, stepfather, grandfather, uncle, cousin and brother-in-law passed away peacefully at the age of 89.  Don was predeceased by his sister, Shirley, who died at birth; parents Alice (nee Choinière) and George Kent; his first wife of 22 years, Alvina (nee Deverou) Kent; as well as many special relatives.  He leaves behind many loved ones who will miss him dearly, his loving wife of 34 years, Joyce (Abrahamson) Kent; children, Mark Kent (Serena Donnelly), Chris (Jean-Marie) Kent, Paul Kent, Teresa (Kevin) Doucette, and Carmel (Troy) Nicolson; and stepchildren, Crystal (James) Kritikos, Terri (Gary) Kreklewich, Doug (Vanessa) Abrahamson. He was lucky to have many grandchildren: Alex, Sarah, Taylor (Sarah, Bellamy-great-grandson), Sebastian, Jonathan, Connor (Tabitha), Liam, Sierra, Simone, and Dominik.  Although essentially Don was an only child, he leaves behind his cousin Richard (Ruth) Pickering who was like a brother to him.  Other special people in his life include Carolyn Kent, sister-in-law and brother-in-law Marie and Ernie Evans, sister-in-law Louise Arnett, many nieces and nephews, former colleagues, friends, and students he mentored.

Don was the son of Alice and George Kent.  He was born in Medicine Hat, AB on January 25, 1933, and lived in Medicine Hat until 1941 when the family moved to Montreal.  George, his father, took a job in a munitions factory supporting the Allied war efforts.  In 1948, another move brought the family to Regina where he attended Campion High School.  Don attended the University of Saskatchewan where he received his B.Sc. in Geological Engineering and a M.Sc. in Geology. He earned a Ph.D. in Geology from the University of Alberta.  Regina became his permanent residence where he worked for the Department of Mineral Resources Geological Subsurface Lab. Later, he became a professor of Geology, followed by the Head of the Geology Department at the University of Regina.  Although he demanded a lot from his students, he was well liked and admired by them. Don’s research on understanding the petroleum geology of Canada has provided much of the foundation upon which petroleum exploration in Saskatchewan was based. He received many awards for his professional work, with the most recent being, The 2021 Canadian Professional Geoscientist Award.

Don’s love for football led him to become involved in officiating the game at all levels for 26 years, including a stint in the CFL.  He established the Regina Football Officials Association and mentored many officials.  In 1981, he joined the CFL Timekeeping Crew and became an Assistant Timekeeper for home games for the Saskatchewan Roughriders.  In 2011, Don decided it was time to enjoy his season tickets and view the Rider games from the stands. In recognition of his contributions to football officiating he was inducted into the Saskatchewan Sports Hall of Fame in 2010.

Don had a love for travelling.  Many family vacations were spent travelling in a station wagon stuffed with his children, windows rolled down as the main form of air-conditioning, checking out the geological sights around Saskatchewan, Alberta, Montana, and North Dakota.  Later, his love for travelling became yearly cruises travelling to many Caribbean destinations with his wife, Joyce.  They took many pictures of these vacations and shared them proudly with family and friends.

Don lived a long, successful life, and has a legacy of many accomplishments.  However, the most important legacy that he leaves behind is that of a wonderful man who has instilled in his family a love of geology, football, travelling and the value of being a life-long learner.

Don was a long-time parishioner at Holy Cross Church where he was a member of the choir and parish council.  It is fitting that the Funeral Mass celebrating his life will be held at Holy Cross Roman Catholic Church, 315 Douglas Avenue East, Regina, SK, on Tuesday, June 14, 2022, at 10:30 a.m.  For those unable to attend, a livestream may be viewed at https://youtu.be/8lltcj-7igI. A special thank-you to the nurses and doctors in 3A at the Pasqua Hospital who helped make his final days comfortable.  In lieu of flowers, donations can be made to the Palliative Care unit at the Pasqua Hospital or to the Parkinson’s Society.

Share Your Memory of
Donald
Upload Your Memory View All Memories
Be the first to upload a memory!
Share A Memory
Send Flowers
Plant a Tree