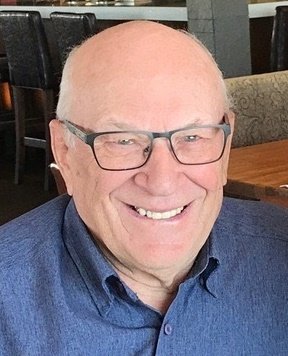 Alfred planted his 64th crop this past spring doing exactly what he loved…farming. The Bechard family has a long history of farming going back to Alfred’s grandfather, Severin and continuing now to the fifth generation.  Alfred was a planter and a builder, innovator, inventor, motivator and had a positive impact on countless lives through his strong faith in God. He will be remembered for his contributions to the community and society at large through his involvement in and on boards and projects too numerous to mention. Most notably he was instrumental in the formation of the Weyburn Inland Terminal as one of its original directors, served on the Sask. Power Board and was actively involved with Full Gospel Businessmen’s Fellowship and his local church congregation in Sedley.  Another of Alfred’s loves was hockey and played two times a week with the Oldtimers in Regina up until this past spring. In November of 2018 Alfred was inducted into the Canadian Oldtimers Hockey Hall of Fame. But nothing could compare to his love of his God and his family. Alfred lived life to the fullest and “left nothing in the tank.” His motto always was; “If a little is good, more is better” and his positivity was contagious. Alfred will be sorely missed by all who knew him. Great will be his reward in heaven!

A private graveside service will be held at the Pleasant View Cemetery on Sunday, October 4, 2020. In lieu of flowers, donations in Alfred’s memory may be made to the Regina Food Bank.

Share Your Memory of
Alfred
Upload Your Memory View All Memories
Be the first to upload a memory!
Share A Memory
Plant a Tree