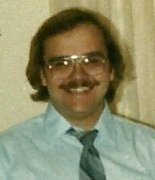 A devoted son. A brother we could lean on. The coolest uncle. Doug knew everything including the best books, the funniest movies and always played our games as if they really mattered. A good friend who was always available on moving days, for babysitting, pet sitting or just hangin' out. They say you can tell a lot about a person by who their friends are. Doug always had several long time, loyal friends because he was a decent, funny, giving person who really cared about people. Doug died peacefully at home surrounded by his beloved cats, having succumbed to a chronic illness. He will be terribly missed by all who loved him. Predeceased by his parents, Gordon and Irene Irvine; sister Terry Riggle and nephew Ryan Barber; brothers-in-law Garth Barber, Rory Riggle and Johnny Yarshenko. Doug is survived by sister Jan Yarshenko (Steve Glass); nephews Adam Riggle (Ginny) and Brandon Riggle (Alicia) and niece Sheena Riggle along with all of his devoted friends. You know who you are. Doug graduated from Sheldon Williams Collegiate in Regina, SK, attended SIAST Regina Campus and worked at several Regina businesses over the years including the Regina Inn, Wascana Country Club, Superstore, Dollar Store and in the freight department at the STC Bus Depot in Regina. Doug was an avid reader and enjoyed movies, music and spending time with and his cats and his friends. It is a rare man indeed who lives a life so blameless as to leave only friends in death. A private graveside service will be held. Flowers gratefully declined, anyone who wishes may donate in Doug's memory to Regina Cat Rescue (reginacatrescue.com).

To send flowers to the family of Douglas Irvine, please visit Tribute Store

Share Your Memory of
Douglas
Upload Your Memory View All Memories
Be the first to upload a memory!
Share A Memory
Send Flowers