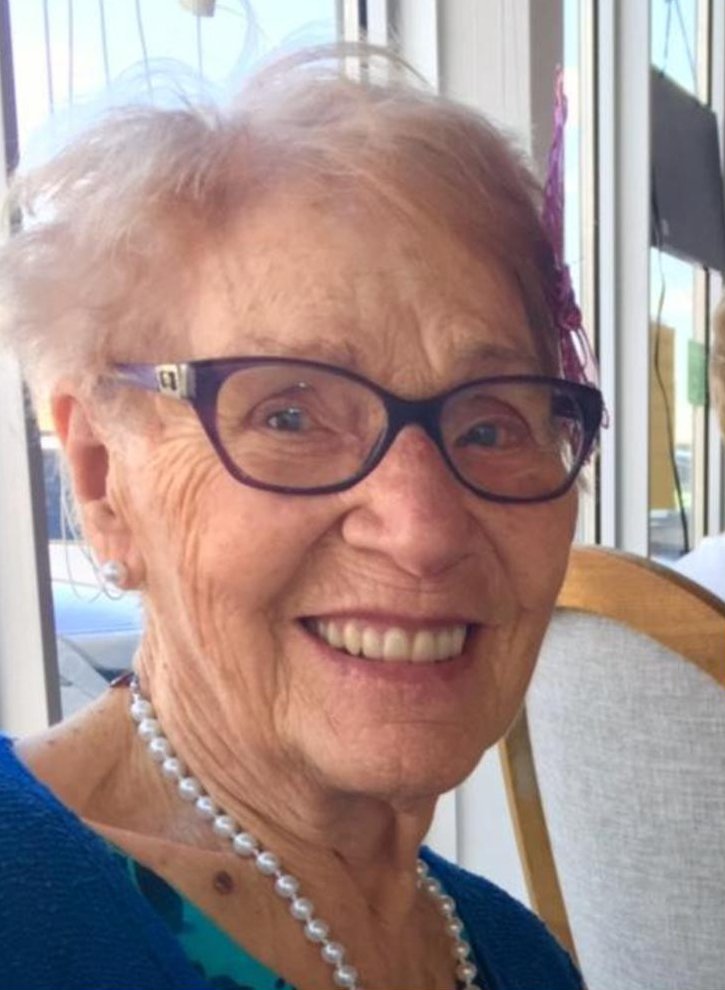 Pauline was born on March 31, 1922 in Illmington, Shipston-on-Stour, Warwickshire, England to Archibald and Phyliss Marjorie South. She passed away on August 21, 2017 at the age of 95 years. When she was 5 years old her parents decided to leave England and immigrated to Canada and settled on farmland near Silver Park, Saskatchewan. She attended the rural school in the area, grades one through eleven. As a young woman, Pauline lived and worked in Ottawa, Edmonton and Vancouver. Pauline was an independent woman who enjoyed the adventure of exploring Canada. When she moved to Regina in the late 1940’s her main interest was playing women’s softball and enjoying the company of her girlfriends.  When she met Bob Griffin he had no easy task convincing Pauline that spending time with him was what she should be doing. His persistence finally won out and on March 31, 1951, Pauline’s 29th birthday, Robert C. Griffin and Pauline M. South were married. She was always active and interested in her family, friends, and community. Pauline was an avid gardener, as were her parents and her brothers. She loved to spend time working in her yard and creating beautiful spaces. Her love of gardening gave her friends and family many happy hours enjoying the peaceful and colourful spaces she created in her yard. She, like her parents, passed on the love and joy of creating outdoor spaces to her daughters and grandchildren.  Pauline had many interests; she traveled to England, Hawaii, and on one occasion took a cruise which travelled up the Amazon River. She had a great love for animals, particularly dogs, and supported the Regina Humane society for many years. She led a seniors’ exercise group at St. Mark’s Lutheran Church for many years and remained a participant well into her 90’s (she was also a believer in daily walks on her treadmill). Her zest for life, her curiosity, her interest in others and a genuine kindness and grace is what made Pauline an exceptional person. Pauline was predeceased by her husband, Robert Griffin, her parents and brothers. She is survived by her daughters Leslie Kirkwood, Susan Griffin (Neil Longley) and Patricia Griffin (Murray Selby); by her grandchildren Cory (Christine) Pirlot, Jamila Kirkwood, Josh (Brenda) Kirkwood; and by great-grandchildren; Kyle, Kayleigh, Mashaela, Allyna, Aiden, Alexis, Kimora, Otis and Pauline Mary; along with many special nieces and nephews.  Pauline is also survived by her sister-in-law and great friend Elizabeth South. Know that she loved you all. The family would like to thank the residents and staff at Extendicare Sunset.  And a special thank you to her roommate Jeanne, her whist group, and caregivers Vic and Monica.  All who helped her adjust to and enjoy her time at Sunset. It is with sadness and acceptance that we say good-bye.  A full life well lived. A Memorial Service will be held  at 10:00 A.M. on Saturday, September 16, 2017 at Broadway United Church, 105 Broadway Ave, Regina, SK with fellowship to follow.

Share Your Memory of
Pauline
Upload Your Memory View All Memories
Be the first to upload a memory!
Share A Memory
Send Flowers