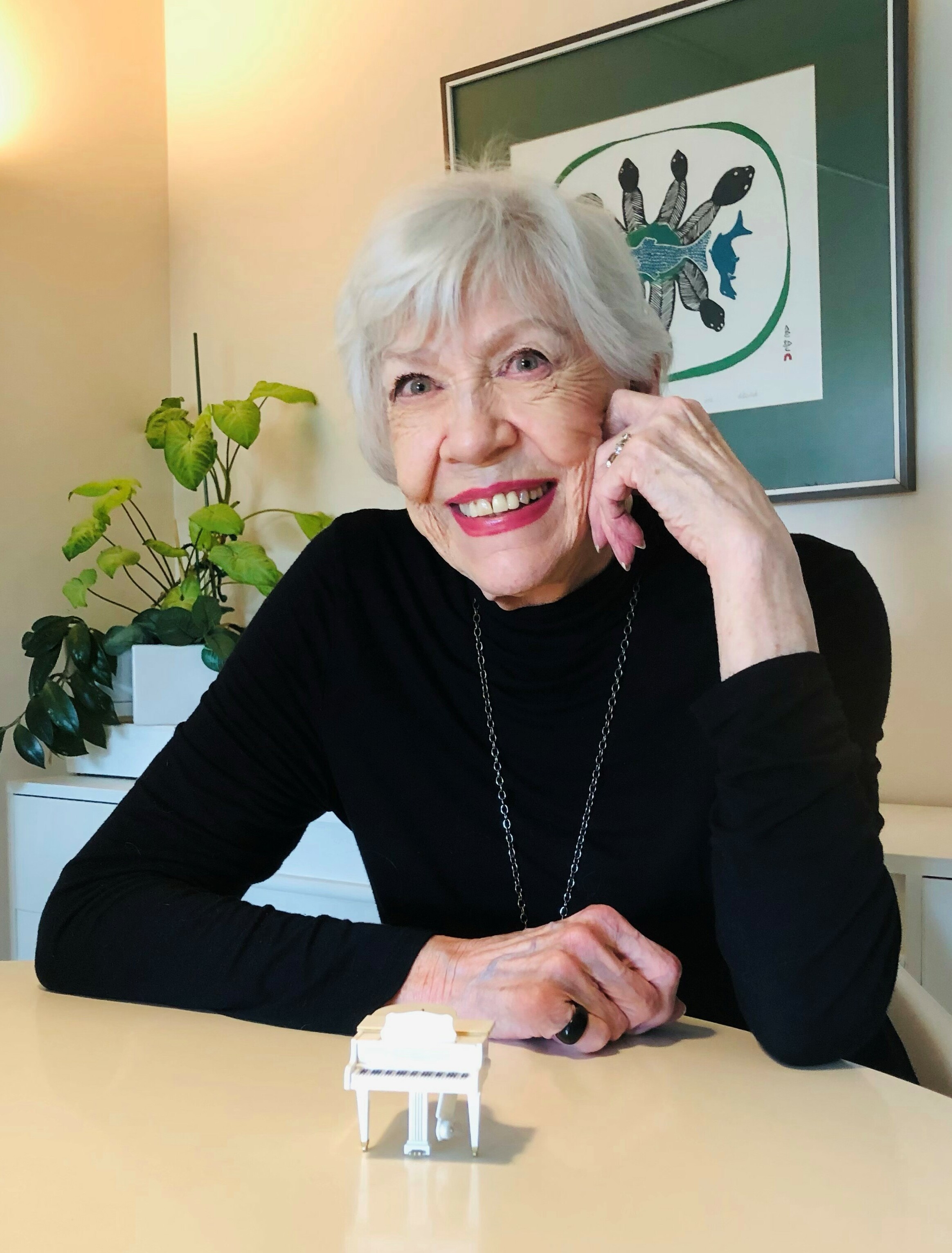 Please share a memory of Pat to include in a keepsake book for family and friends.
View Tribute Book

Pat Steel went to be among the stars on New Year’s Day. Pat was born in St. Boniface, Manitoba and grew up at the St. Charles Country Club in Winnipeg, where her father was the stationary engineer. Growing up as a staff kid at an exclusive golf club greatly influenced her ideas of the world. Her childhood was happy, with horses and music and the complicity of her older brother Jimmy, whom she adored.

Pat was a natural singer, who started performing professionally at the age of 16. She married her first husband, John Krause, and moved with him to Regina in 1958. They had three children.

A gifted jazz singer and maraca player, Pat met Regina piano player Bob Moyer in 1960. Their professional relationship gradually evolved into a great musical love story that still endures long after their 31-year marriage, which ended when Bob died in 2005. Pat and Bob made music together for over four decades, through small jazz ensembles and later, with the Bob Moyer Big Band. Pat was a jazz musician through and through, and was respected by colleagues, and admired by her many dear friends and fans. Empathetic and supportive, she inspired countless young musicians with advice, encouragement and a steady presence. She was so proud of all the young players who came up through the band and went on to become professional musicians, and was thrilled to see Bob’s work live on under the direction of Brent Ghiglione.

After Bob’s death and the end of her singing career, she found a second life through recovery, and lived her last years as an active and engaged member of the Regina arts scene, playing maracas whenever she found a band that could do a Latin tune. She was politically engaged and savvy, and moved through different social circles with ease. Pat met everyone where they were, at every age and stage of their lives. She believed in justice and fairness, especially for Indigenous people, and was sustained by their friendship through many difficult times.

Predeceased by her parents, James Roe Steel and Edna Lucy Steel, Pat mourned the early deaths of her brother Jimmy Steel and her son Greg Krause, and later, her special niece Andrée Steel. She greatly missed her friend, Shirley Watson. She is survived by her daughter Carle Steel, and son James Steel. She maintained close relationships with her stepchildren, Bill Moyer (Wendy), Doug Moyer (Jill), and Karen (David) Dross and their children, and her aunt Geraldine Kjartenson and family. She had many deep and lasting family connections with the extended Stonechild and Desnomie families, and Joely BigEagle-Kequahtooway and her husband Lorne Kequahtooway and their family and friends. She loved her chosen daughters Jennifer Brass and Yvette Stonechild, and found a profound connection in her dear sister Shannon Sangwais.

Although she was a public figure, she was also a very private person, who faced her life in a deeply human way. A gregarious introvert, Pat was both sharp and silly, and had a keen eye and an excellent, self-deprecating wit. [Pat, self-deprecating means when you make fun of yourself.] She loved diamonds and white, and left a trail of sequins wherever she went. She was relentlessly curious, still fascinated by the world. She was a keen, if frustrated, Trump watcher, and was very disappointed to be leaving just when it was starting to get good. A lifelong animal lover, she was bereft without her constant feline companion Cheznee, who left her in early spring. She jokingly self-identified as a unicorn, and in so many ways she was. We are all so lucky to have been blessed with her light.

A Bob Moyer Big Band concert in Pat’s honour is planned for a future date. In lieu of flowers, a donation in her name may be sent to Creative Kids Saskatchewan, or any charity that supports children’s access to the arts.

Look inside to read what others have shared
Family and friends are coming together online to create a special keepsake. Every memory left on the online obituary will be automatically included in this book.
View Tribute Book
Services for Pat Moyer
There are no events scheduled. You can still show your support by planting a tree in memory of Pat Moyer.
Plant a tree in memory of Pat

Share Your Memory of
Pat
Upload Your Memory View All Memories
Be the first to upload a memory!
Share A Memory
Plant a Tree