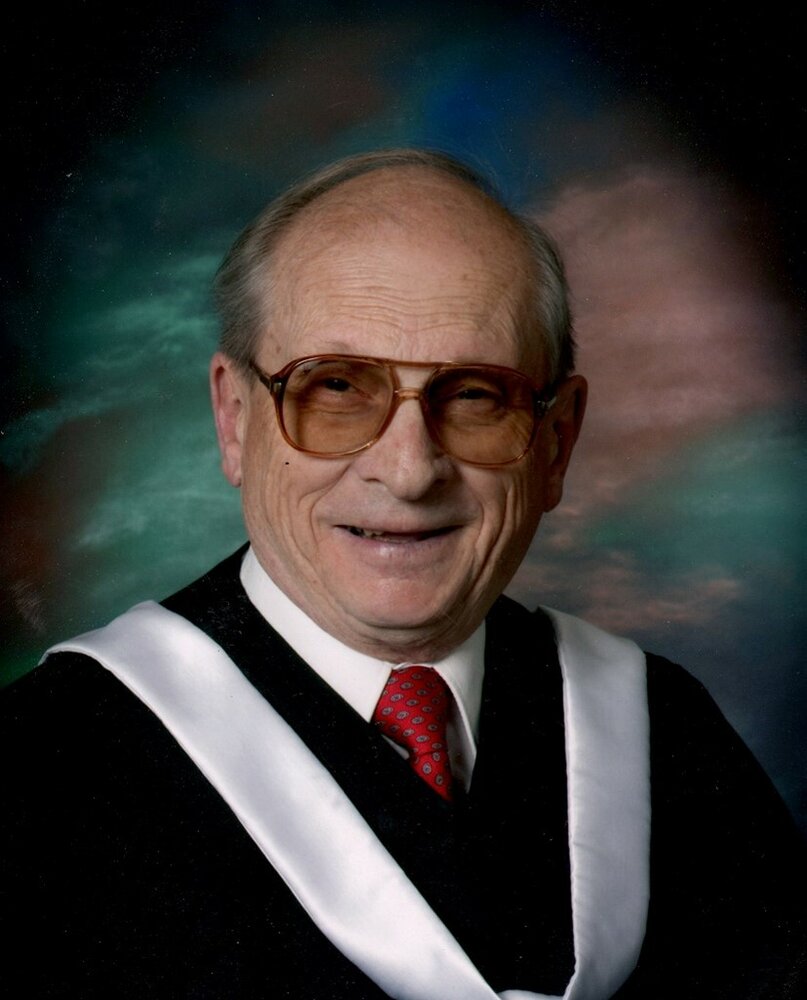 John Stratford Burton was born in Humboldt Saskatchewan to Joseph W. and Marjorie Burton. He is survived by his loving wife, Zenny; daughter Christine; son Mark (Marj Walsh); grandchildren Maxwell, Joel, and Ellen, and Poul and Rachel, all of Regina; and brother George (Gladys) of Humboldt, and their family. He was predeceased by his son James just 18 months ago.

John and his two younger brothers, Harold, and George, were raised on the family farm at Burton Lake, named after his grandfather, who settled the area around the turn of the century, and attended Burton Lake school and the Humboldt High School. He broke his collarbone at age 12. John has always had a lean to the left – maybe that's the cause! At the University of Saskatchewan, he completed degrees in economics and agricultural science, becoming an ‘agricultural economist’ before the degree or profession were established. He subsequently went to the London School of Economics in London, England where he survived the ‘killer smog’ of 1952, attended Queen Elizabeth’s coronation in 1953, and was a delegate to the Socialist International in Croatia. On his return to Canada, he worked on economic development under Tommy Shoyama in Premier Tommy Douglas’ office.

John was Roman Catholic, and his values and politics were informed by his faith: to care for the widow and orphan, to welcome the stranger and refugee, to proclaim freedom to the captive, and good news to the poor. It was these values that led him to join the CCF and its successor, the NDP. John’s lifelong interest in politics emanated from a father and grandfather who were pioneers in the fight for social and economic justice. After running several electoral campaigns, he decided to take a run at public office himself, coming close to unseating then Liberal Minister of Agriculture, Jimmy Gardiner, in Melville, where he had recently moved to work.

While in Melville, John was introduced to Zenny Wiwchar, a nurse, by her mother, at a CCF Valentine’s Day tea. Zenny was in town for only a week prior to leaving for a new job. John wasted no time: he took her out nearly every evening. By June, she was back in Melville, by August they were engaged, and in November of the same year they were married. Both were heavily involved in the early fight for Medicare.

Two years and a baby later, John, Zenny and Christine moved to Regina where John worked with Premier Woodrow Lloyd, Allan Blakeney, Walter Smishek, and Grant Mitchell to bring Medicare to Saskatchewan and, ultimately, Canada. His son Mark was born at home because the doctors who came to Regina to work under Medicare were refused hospital privileges; the Leader Post, to its shame, forced the new parents to change the wording of the birth announcement to not mention Medicare.

His interest in politics and commitment to fairness and human dignity never waned, and in 1968, he was elected Member of Parliament for Regina East, serving under Tommy Douglas and David Lewis. The entire family decamped to Ottawa, including youngest son, James, who turned three as they pulled into the nation’s capital. In 1973, he and the family returned to Regina, where he threw his mind, political savvy, and energy into projects for Premier Allan Blakeney. Most notable amongst these was the nationalization of the potash industry and creation of the Potash Corporation of Saskatchewan. Potash is one of our province's greatest resources, and it was one of his greatest regrets that the Conservative government essentially gave it, and its profits and jobs away. He was so convinced of this that he returned to the University of Regina at age 75, where he received his Master’s (with distinction), and made it the subject of his master's thesis, ultimately published as a book, Potash: The Story of Saskatchewan's Pink Gold, widely recognised as the definitive work on Saskatchewan’s potash industry.

Later, he parlayed his expertise into a five-year CIDA 'expedition ' to Zambia, Africa, where he worked to strengthen the agriculture industry and local bureaucracy. While there, he and Zenny traveled widely, including trips to South Africa, Botswana, Zimbabwe, Egypt, and Israel; Australia, and New Zealand; China, Japan, and India.

In retirement, he remained active in politics, bridge-playing, and his parish, including as a member of the Knights of Columbus for 77 years! He was immensely proud of his children, adored his grandchildren and loved his wife to his last day.

Saskatchewan is a better place for his having lived, and poorer for his passing.

The family gratefully declines flowers, and instead asks that you work to make the world a better place.