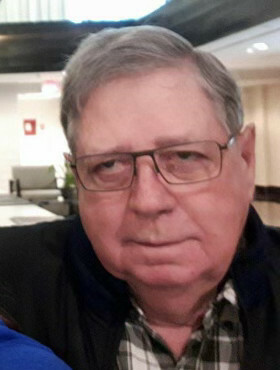 Please share a memory of Eldon to include in a keepsake book for family and friends.
View Tribute Book

It is with great sadness that we announce the passing of Eldon Roy Hart of Regina, SK.    He was predeceased by his daughter Holly Hart; parents Gordon and Clara Hart; sister Marilyn Hanson; and brother-in-law Dave Reid.  Eldon will be sadly missed by his grandchildren Christopher Hart and Jordan Hart; great-grandchildren Haydon and his mom, Amanda; Liviana, Myla and their mom, Chelsea; sister Valerie Hart of Prince George, B.C.; brother-in-law Terry Hanson; stepson Shawn Soloman; step-daughter Kim Skrypnychuk; as well as many nieces and nephews.

Eldon moved to Regina in the early 1970’s and began his trucking career at Fred’s Esso, towing trucks.  He then bought his father’s homestead. He and his then-wife Bev lived there and later, at the top of Bank building; and finally the old principal’s residence in Fillmore.   Eldon sold the land in 1983.

After Eldon and Bev divorced, Eldon bought the hotel in Southey in 1985 – “the Hotel with a Hart”.   Eldon met and married Anna May Mitchell and her two children, Michelle and Ashley, which lasted about three years.  He then met Sharon Weber and her two children, Shawn and Kim Soloman.   They stayed in Southey until Eldon sold the hotel in 1995.  He then went to work at CS Day transport in 1996, where he remained employed until he became sick in the spring of 2022.

Eldon loved to fish and once a year, for the last forty years, would head up to northern Saskatchewan with his buddies.   He also loved curling and was instrumental in helping the Fillmore Curling Rink get artificial ice.  Eldon didn’t mind golfing, but when his friend Reg kept beating him, he didn’t like it as much.  All of the above activities would be accompanied by a drink which he really loved.  But what Eldon really loved more than anything was his family and he spent his whole life caring for them.

We will have a Graveside Service at 2:00 p.m. on Thursday, October 6, 2022 in Fillmore Cemetery, Fillmore, SK followed by a Celebration of Life at the Fillmore Hall.  In lieu of flowers, donations may be made to a charity of choice.

Share Your Memory of
Eldon
Upload Your Memory View All Memories
Be the first to upload a memory!
Share A Memory
Send Flowers
Plant a Tree