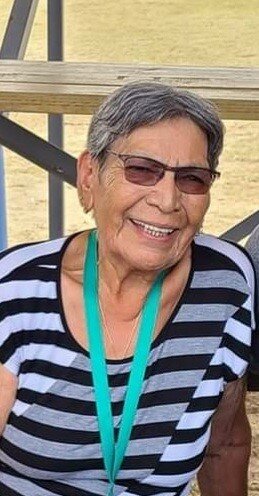 Please share a memory of Barbara to include in a keepsake book for family and friends.
View Tribute Book

“One Who Walks with the Sun”

It is with great sadness we announce the passing of Barbara Borkowski (nee Rockthunder) of Bengough and Regina, SK, at the age of 75 years. Barbara passed away peacefully Sunday, September 18, 2022 at Pasqua Hospital. She was predeceased by her loving husband Alan Borkowski; son Bradley Anderson; parents John and Mary-Louise Rockthunder; siblings Alice Berger, Irene Kaisowatum, Grace Okemow, Percy Rockthunder, Charlie Rockthunder and John Rockthunder; as well as two sisters in infancy; and Nancy Rockthunder, whom she called Mom.

Barb is survived by her sons Ernest (Kim) Anderson, Eric Anderson, Grover (Mel) Caldwell; special nephew Colby Rockthunder, who she helped raise; special granddaughter Merridiansky Anderson; special grandson Rickalan Anderson whom she spent almost every evening with going to the park, playing tag hide and seek or out for drives; as well as numerous other grandchildren and great-grandchildren whom she loved, although she was unable to see them; sisters Margaret Rockthunder, Marie (Bruce) Smith; adopted sister Erma Crowe; and numerous nieces, nephews, and extended family.

Barb loved playing Bingo, where she had a lot of friends and was well known to her Bingo friends. Barb worked as a Matron for the City police and RCMP, as well as worked with children and youth which she enjoyed and would talk of often. The family would like to thank the hard-working Nurses and Doctors of Pasqua Hospital, as well as Wendell Starblanket for all they did for her.

Wake will be held at 4:00 p.m. on Thursday, September 22, 2022 at Piapot Community Hall, Piapot First Nation, SK. Funeral Service will be at 11:00 a.m. on Friday, September 23, 2022 at the same location, with interment to follow at the Rockthunder Family Cemetery.

Share Your Memory of
Barbara
Upload Your Memory View All Memories
Be the first to upload a memory!
Share A Memory
Send Flowers
Plant a Tree