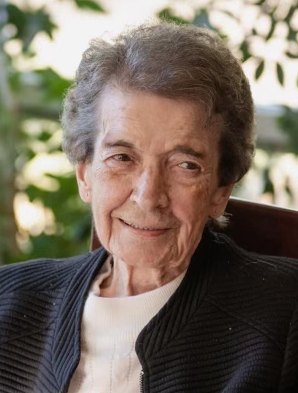 Please share a memory of Helen to include in a keepsake book for family and friends.
View Tribute Book

Helen was born on March 20, 1932, near Grenfell, SK. She and Len were blessed with two sons: Jim (Patti), Rick (Mary Ann); grandchildren Heather (Brad) Helgason, Erin (Dean) Henrikson, Brennan (Celise) Hack, Jennifer (Brendan) Fehr, Bryan (Kirsty) Hack; as well as ten great-grandchildren. She is survived by her sister Lydia Gwillam and brother Raymond Bohn. She was predeceased by her husband Leonard in 2002; parents, Carl and Mary Bohn; and brother Norman.

Helen was a devoted wife, mother and grandmother. Nothing gave her more pleasure than spending time with her family.

Len and Helen were married in 1953 and spent time in Grenfell, Wilcox, and Ormiston before settling in Cupar in 1962. It was there that they raised their family. Helen worked at the Doctor’s office in Cupar. When they moved to Regina in 1973, she worked at the Northgate Medical Clinic for many years. Upon retirement, they settled back in Grenfell.

Helen took great pride in following her family's accomplishments. She had many interests, including cooking, baking, and playing cards, and was an avid reader and sports fan. Her grandchildren swear that her Saskatoon Pie is the standard to which all pies are held.

A Private Family Service will be held at a later date with interment in the Grenfell Cemetery.

Look inside to read what others have shared
Family and friends are coming together online to create a special keepsake. Every memory left on the online obituary will be automatically included in this book.
View Tribute Book
Services for Helen Hack
There are no events scheduled. You can still show your support by planting a tree in memory of Helen Hack.
Plant a tree in memory of Helen

Share Your Memory of
Helen
Upload Your Memory View All Memories
Be the first to upload a memory!
Share A Memory
Plant a Tree