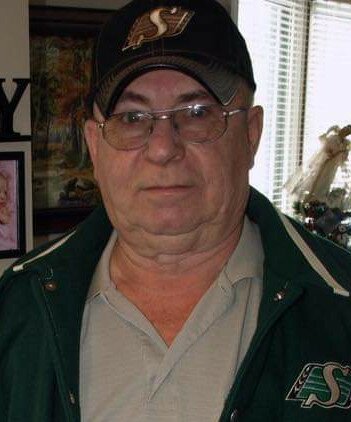 Please share a memory of Jim to include in a keepsake book for family and friends.
View Tribute Book

Jim was born on May 16, 1941 to August and Elise Hauk in Grenfell, SK. He attended school in Grenfell while growing up on the family farm. After finishing his primary education, Jim spent a summer with the militia in Kelowna, BC.

Upon his return, Jim moved to Regina, SK where he obtained his journeyman electrician trade.  He then spent several years working on large electrical projects in the city of Regina.  In the early 1970’s, Jim returned to Grenfell and started his own electrical business.  He spent many years serving the people and businesses in Grenfell and surrounding area.  Jim was known as a “jack of all trades”.  He worked in the local lumber yard, was the town water plant manager, as a school bus driver, a concrete hauler with CrushRite, and was the chief rototiller and grass cutter for the community and surrounding area.  One of his biggest passions was volunteering with the Grenfell and District Fire Department.  Jim took great pride in his service and received the Saskatchewan Protective Services Medal from the Governor General of Saskatchewan in 2003.

Jim was an avid woodworker.  The students at the elementary school in Grenfell benefited from his handiwork, as he built the classroom lockers, and when Jim built something, he built it to last.  He developed a passion to craft pens and pencils using his lathe, and almost everyone he was close to, received a beautiful hand crafted ice cream scoop and an inlaid cutting board.  If you didn’t maintain these custom gifts to Jim’s standards, he was known to confiscate them so he could repair them.  You’d only receive them back once you promised to take better care of them and to never put them in the dishwasher again.  Jim kept his mind sharp.  He loved word searches, Sudoku puzzles, jigsaw and 3-D puzzles, and he loved to read.  Once he received his first e-reader he read as much as he possibly could.

Jim met the love of his life, Cheryl and were married on August 8, 1987.  They lived in Grenfell until June 2018 when they moved to Regina, SK.  Throughout their marriage, Jim and Cheryl enjoyed many seasons watching the Roughriders from their seats at Taylor Field, Section 6, Row 4, Seats 8 and 9, and every night watched the Blue Jays play!  One of the most memorable trips that Jim and Cheryl took was to celebrate their 25th wedding anniversary when they went on a Caribbean Cruise.  They had a wonderful time, as they were both able to experience their first flights, and the first time seeing the blue waters of the Caribbean.

If there’s one quality that Jim passed on to his sons was to always put your best into everything that you do.  Jim had an amazing work ethic and was a man that could always be depended on.  His grandchildren were the apple of his eye.  Jim took pride in all of their accomplishments, and looked forward to hearing about what new activity they were all partaking in.

At the time of Jim’s passing, his health was starting to decline, and his family is so grateful that he passed quickly and peacefully.  Jim is survived by his wife Cheryl; sons Paul; Mark (Connie); Jason and his children Nathanael, Annika and Rebekah; Scott (Janet) and their children Andrew, Jacob and Grace; Mathew (Jessie) and their children Nash, Shay and Zane; sisters Dena, Karen (Gib), Cathy (Doug); as well as numerous nieces, nephews, family and friends.  He was predeceased by his parents, August and Elsie Hauk.  As per Jim’s wishes, no funeral service will be held.  A Family Celebration of Jim’s Life will be held at a later date.

Jim was a passionate volunteer firefighter.  In lieu of flowers, please make a donation in Jim’s memory to your local fire department.

Look inside to read what others have shared
Family and friends are coming together online to create a special keepsake. Every memory left on the online obituary will be automatically included in this book.
View Tribute Book
Services for Jim Hauk
There are no events scheduled. You can still show your support by planting a tree in memory of Jim Hauk.
Plant a tree in memory of Jim

Share Your Memory of
Jim
Upload Your Memory View All Memories
Be the first to upload a memory!
Share A Memory
Plant a Tree