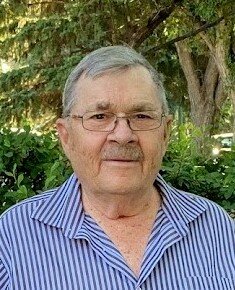 Please share a memory of Jerome to include in a keepsake book for family and friends.
View Tribute Book

Jerome John Salamon of Regina, SK passed away peacefully on Thursday, February 10, 2022 at the age of 86.    He was the youngest of five siblings born to John and Josephine Salamon.   Jerry was predeceased by his two daughters Wendy Salamon and Deborah Wiggins; as well as many family members and friends.

Jerry was an electrician by trade and a farmer by heart.  He worked for Alliance Energy (Sun Electric) for 39 years.  Jerry believed in an honest day’s work for an honest day's pay.  He did not waste and always told us if you are going to do something, do it right the first time.

Jerry loved farming.  He was born on the family farm and continued his lifelong love of farming there.  Jerry would always call friends and neighbors to ask how their crops were and how much rain they had gotten.

Jerry was an amazing gardener.  He would plant a large garden at the farm and then a smaller one in the city.  Whenever anyone would come for a visit, he would visit for a bit and then disappear to the garden and bring back bags and bags of fresh vegetables for everyone to take home and enjoy.

Funeral Service will be held in the spring at Sacred Heart Roman Catholic Church in Lebret, SK.

In lieu of flowers, we ask that donations be given on his behalf to Grace Hospice, William Booth Special Care home, 50 Angus Road, Regina, SK, S4R 8P6, where he was lovingly cared for by the staff.  A special Thank you to Cliff Geiger for your spiritual guidance and friendship while Dad was there.

Share Your Memory of
Jerome
Upload Your Memory View All Memories
Be the first to upload a memory!
Share A Memory
Plant a Tree