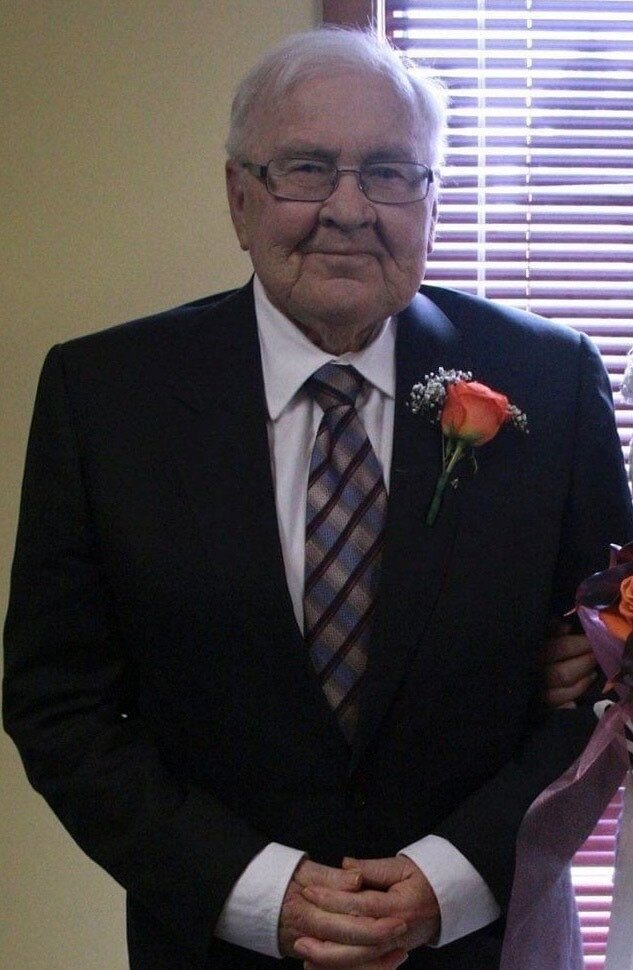 Alfred Gordon “Gordie” Fuller left this world on Wednesday, December 1, 2021 and transitioned peacefully into the presence of his Lord.  He is now reunited with loved ones that had gone on before him including his first wife Joan (nee Myers); his parents Arthur and Ruth Fuller; his sister Jean and brother-in-law David Hildebrand; and his sister-in-law Norma Fuller (nee Cook).  He was predeceased by Joan’s parents, Dudie and Joyce Myers; and by his father-in-law Emanuel Schulz.  He leaves to mourn, his wife Corinne (nee Schulz); children Natalie (Karl) Stabnau, Maria, Alice, Abby, and Nolan; his two children with Joan, Lesley (Sandra) Fuller, and Christine (Ian) Lundgren; his grandchildren Andrea Chalifoux, Amanda Wilke, Bethany Fuller, Evan Pyra; and great-granddaughter Kailey Harnett. He also leaves behind his siblings Gerald Fuller, Carole (Lloyd) Maxwell, Terry (Jean) Fuller, Loretta (Errol) Singh, and Rhonda (Tim) Lees; and his parents-in-law Eileen Schulz, Lisa Schulz, Lori Erhardt, Brenda and Richard Duthie, as well as many nieces and nephews.

Dad was born in Earl Grey, SK and spent his childhood on his parent’s farm.  He attended the University of Regina where he studied chemistry and went on to teach in Saskatchewan high schools in Strasbourg, Regina, and Earl Grey where he served as principal. Dad consulted to the Ontario Ministry of Education assisting in the revision of the chemistry curriculum while teaching in Kenora. He had the inquiring mind of a scientist with an extraordinary aptitude for chemistry, physics, and mathematics.  Eventually, Dad’s affinity and yearning for the land led him back to the family farm that had been his grandparent’s homestead near Bulyea, SK. He was proud of his British heritage and traditions and honored the memory of his forefathers with tales of their lives. Dad often said he had found a little piece of heaven on earth and was content in the natural beauty of the farm where he lived, worked and raised his family.

Dad had heartache in his life with the loss of his dear Joan, but he persevered and went on to raise a second family with his devoted wife Corinne.  He was a caring husband and father who had a strong influence on his family and who loved his wife and children dearly. There was little that pleased Dad more than having all his family gathered around the table at the farm to enjoy good food and fellowship.  He always wanted the best for us all and was a steadfast source of wisdom and sage advice.

Dad lived with the perspective that this world was not his home and he was merely passing through this life to something grander and more beautiful.  He was a student of the Scriptures and sought to understand the eternal truths contained within those pages.  Dad was a philosopher and theologian at heart who enjoyed a good thoughtful debate regarding the deeper things of life.  He was a private man, but those close to him found a unique and loyal friend whose wit and sense of humor will be remembered fondly. We will miss him sorely, but we find comfort that he has finally made it home.

The family would like to express our deep gratitude to the staff of 5F at the Regina General Hospital for their care during these trying times.  In keeping with Dad’s wishes, no funeral will be held as the family will honor and celebrate his life privately.  Rest in peace Dad.

Share Your Memory of
Alfred
Upload Your Memory View All Memories
Be the first to upload a memory!
Share A Memory
Plant a Tree