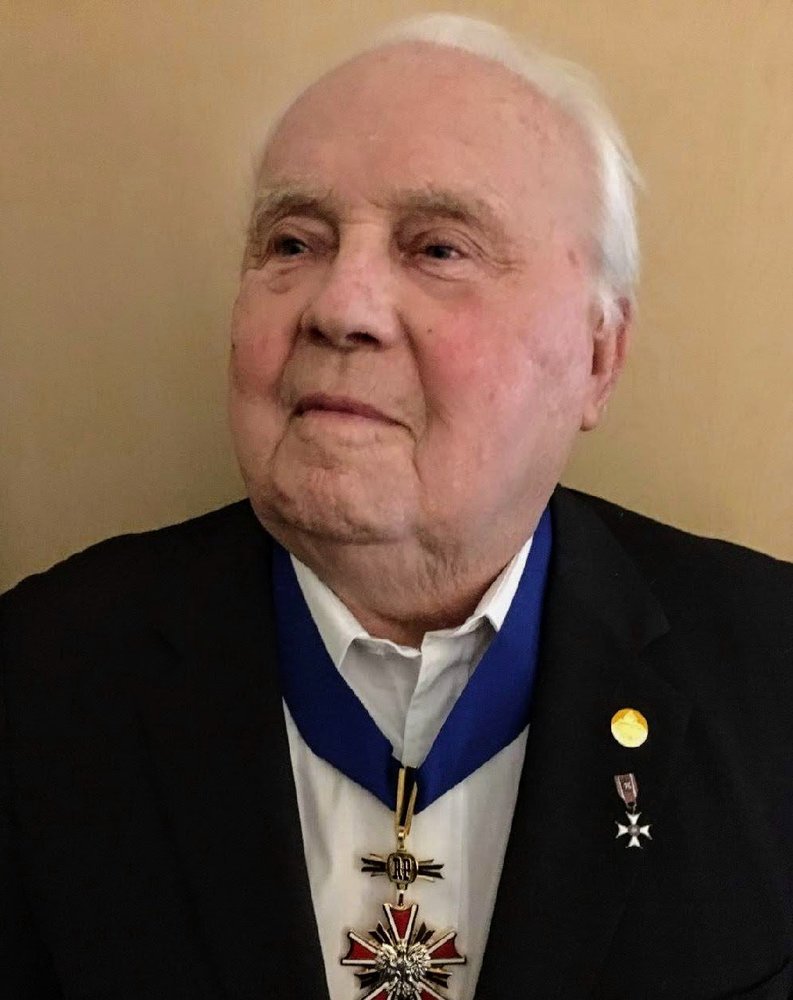 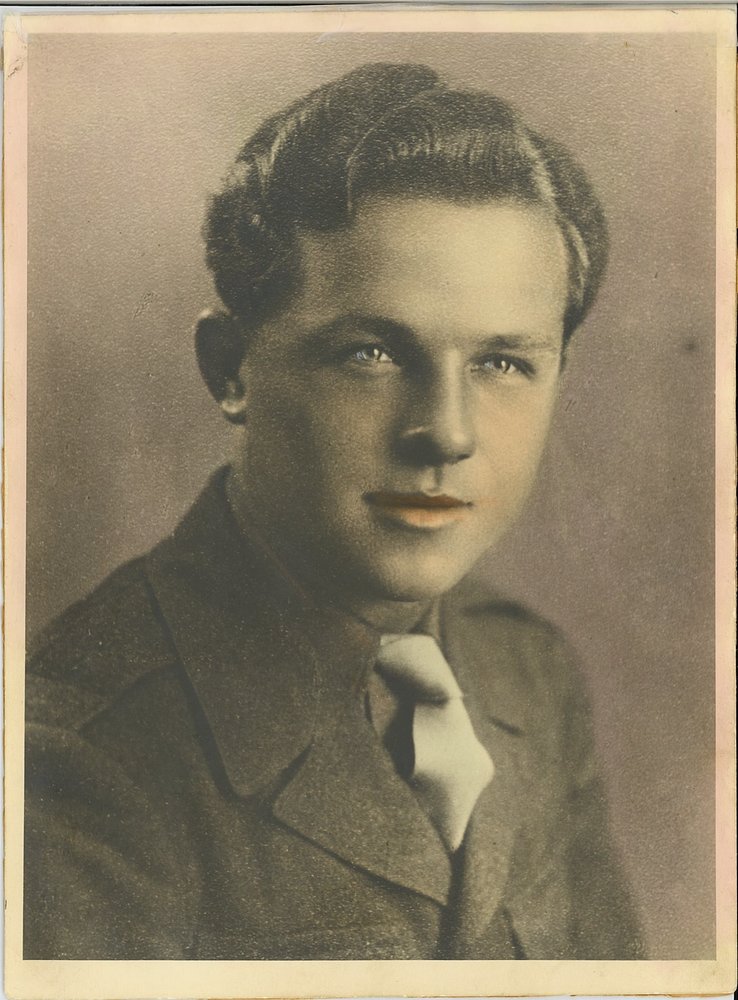 It is with profound sadness that the family of Henry J. Lebioda announces his recent passing in the early afternoon of November 6, 2019. Dad’s health was severely tested after the passing of Mom last June, and several extended hospital stays ensued. He made several ‘miraculous’ recoveries, but the strain of COPD and CHF took its toll. His mind and spirit were willing and able, but the body too weak. His last hospital stay was but a few days, slipping away less than 100 hours before his 93rd birthday. He was sharp until the end, having visits and telephone conversations with all his children less than an hour before his passing.

Dad was predeceased by his wife of 65 years, Maria (Rita), last year; his parents, Nicholas and Josepha (nee Szymankiewicz); and siblings Stan, Monique Chalando, Stefan, Tadeuz, and Irena Konczak.  Left to cherish his memory are his sons Jose (Cathy), Perry (Deborah), and Kenneth (Shannon); grandsons and great-grandchildren Nathan (Lauren) Henry, Peter, and Marie; Andrew (Amber) Elsie and Zara; Christian, and Nolan; brother in law Pierre Chalando; many of mom’s brothers and sisters, and in-laws, and a multitude of cousins, nephews and nieces.

Dad was born November 10th, 1926, in Gauchy, France, a tiny suburb of St. Quentin. The family moved to Quievrechain, FR, where the family lived until Nicholas’ health deteriorated. The family moved back to Ostrowiec, Poland, in 1935, and Nicholas passed at age 49 in 1937. Dad was not even 11 and his mother was left with 6 children. September 1st, 1939, a date the world tries to forget, but will always remember, the Nazi horde swept into Poland and WW2 began. All schools were closed for over a year, and by the summer of 1941 dad was working in a machine shop by day, and schooling at night. Without understanding the history of Polish Partitions, and the fact that the Polish Nation ceased to exist from 1772 until Reconstituted in 1919, one can never understand the ‘fire in the gut’ and extreme pride of Polish Nationalism. Dad, along with many of his countrymen, fought not only the Nazis, but the Russian Communists simultaneously. Poland had many ‘partisan’, ‘underground’, ‘guerrilla’ groups, most working independently to rid their country of the enemy. Dad joined the Holy Cross Mountains Brigade and valiantly fought the Russians as the Nazis retreated. By March of 1945 they were into Czechoslavakia and close to Pilsen by the end of April. At dawn, on the 5th of May, the Brigade liberated the Nazi Concentration camp in Holiszow. 1000 plus women prisoners were freed. French, Polish, Czech, Romanian, and 400 Hungarian Jewish women in 2 separate barracks surrounded by extra barbed wire, barrels of gasoline at the ready. 250 Nazi SS soldiers were captured and turned over to Patton’s 3rd Army. Holiszow is the only Concentration camp liberated by any unit other than the US or Russia. The Brigade was deprived of honor by Communist propaganda long after war’s end.

After the war, Dad was attached to the US 3rd Army for 2 years, overseeing the distribution of food and supplies to starving civilian casualties. He endured a very brief stint in Belgium, working in a dank, dangerous coal mine. This lasted but a few days, as the Poles decided that they weren’t ready to die, working for “some Englishman in some God-foresaken Belgium coal mine”, after they had survived battles in WW2. They went on strike, were jailed for 2 days, and soon after the mine closed.

Dad then was relocated to Holland, as part of a group of Poles sent by the Red Cross to fill skilled worker vacancies. He landed in Leerdam, and worked as a machinist and mold-maker at the Leerdam Glass Factory.  His work was admired by a supervisor, J.M.P. (Peter) Dizy, and soon dad met Peter’s eldest daughter, Maritje (Rita).  They were smitten with each other, and a 4 year courtship developed, culminating in marriage in July, 1953. By November of 1953 they moved to Regina, landing here on a Thursday, and off to work as a machinist at Northwest Iron on Monday morning. Dad’s older brother Steve had sponsored them and had arranged a job for dad. Mom was employed by Burns-Hanley Church Supplies sewing priests’ vestments, a position arranged by Msgr. Gocki, the parish priest at St. Anthony’s.

In August of 1954, 3 of mom’s brothers arrived from Holland. Their first house was started as well as a family. Jose was born in June 1955, mom’s parents with 10 children in tow arrived in 1956 and the Lebioda home was shared by all. A new home for the Dizy family was constructed in 1957, followed by the birth of Perry and Ken in August 1958 and April 1962.  Dad sponsored his brother Tadeuz with his family, to immigrate in 1959; and finally his mother in 1966. She was hesitant to leave Poland until after her daughter had left for South Africa. Mom and Dad were kept busy finding employment for all, and continued in assisting many other Polish families and individuals immigrating to Canada.

The rapture of the Qu’Appelle Valley was intoxicating and soon a summer cottage was constructed at Lake Katepwa. Our summers were filled with endless joy, and our parents enjoyed 62 blessed, peaceful seasons there. Mom loved to swim, and all descendants were ‘genetically predisposed’ to swim like fish. Unfortunately, Dad’s horrific war-time experience of evading capture by Nazis by lying in a water-filled ditch, would only allow him to stand in the water waist deep.

Dad started a machine shop in 1967, ‘Western Hydraulics & Equipt’, and mom dutifully became the bookkeeper. Hard work allowed numerous ski trips to the mountains, summers at the lake, and endless travels. Mom and Dad enjoyed travelling extensively, visiting nearly every province and state, as well as near-yearly sojourns to Holland, Poland, and France to visit relatives.

“We make a living by what we get, but make a life by what we give”, Sir Winston Churchill; best personifies our parents lives. Mom and Dad both studied at the John Paul II centre and became Lay Ministers, to help alleviate the shortage of Catholic priests, through over 2 decades of service. Affliction of various ailments and conditions by those close to them, our parents worked tirelessly and supported various charities such as MS Society, Breast Cancer, World Blind Vision, and aid to many developing countries. For decades they had sent dozens boxes of aid to those still living under Communist oppression in Poland, but in the early 80’s with the availability of under-utilized medical supplies in the province, Dad formed a new charity “Medical Aid to Poland”. For nearly 4 decades, with the unbridled dedication of a handful of volunteers, they were able to send over $20 million in medical supplies to areas in Dad’s homeland, Poland, that were in dire need of aid.  Without the unwavering assistance of fellow Knight, Art Van Der Zalm, for weekly collection and loading of seacans, and Ryszard Zabierek of Czarnkow and Rafal Nadgrodkiewicz in Lodz, for distribution in Poland, our parents’ efforts could not have materialized.

“The best portion of a good man’s life is his little nameless unremembered acts of kindness and of love”, William Wordworth.  Dad gave unselfishly of himself to all in need.  He represented the Republic of Poland as their Honorary Consul for Regina, a task that he undertook with great vigor.  He assisted many Poles with consular and embassy affairs for many years.  He was very involved with the Polish Combatants Assoc. (SPK), and served in almost every executive capacity, including President for several terms.  He was proud to serve his countrymen in all facets of life, no matter where he lived. His dedication did not go unnoticed, as he was awarded many distinctions in his long career. He was Conferred the Order of Polonia Restituta (Rebirth of Poland), awarded for extraordinary and distinguished service;  Awarded the Knight’s Cross, Officer’s Cross, and Commander’s Cross of the Order of Merit of the Republic of Poland , awarded to those that have rendered great service to Poland;   Awarded the Cross of Valour, for valour and courage on the field of battle;  Cross of Merit to recognize service to the state;  to name but a few.  With the downfall of communism and the rebirth of the Republic of Poland, the Holy Cross Mountains Brigade was finally recognized as a tactical unit of the National Armed Forces. Dad was elevated to the rank of Major, Colonel, Brigadier-General, and a few weeks before his passing, full General.  He was made aware of the promotion in mid October, and the actual orders were received in his mailbox the day after his death.

Dad was busy until the very end. He funded the installation of memorial plaque in Ilza, commemorating the 75th anniversary of the Brigade’s battle there, Oct 1st, 1944; and donated 20,000 zloty to the elementary school in Ilza for the purchase of computers, printers, and multimedia projectors. He received acknowledgement of the gifts on Oct. 28th, and on Nov 1st was hospitalized.  In accordance with his final wishes to have a ‘funeral just like Mom’, we will have a Memorial Mass, celebrated in early May, after Easter, and when spring reminds us of a new, eternal life.  A further notice will be published. Private interment will take place when Mom and Dad will be placed under the towering pines of the Catholic Cemetary at Candiac.

Flowers are most gratefully declined. The Henry and Maria Lebioda Memorial Scholarship is being established at Campion College, and donations to it, the Alzheimer Society of Saskatchewan, or the charity of your choice, are greatly appreciated.

We would like to thank all the staff at Victoria Park Personal Care Community for their exceptional, compassionate care provided to our parents over last several years.

“What you leave behind is not what is engraved in stone monuments, but what is woven into the lives of others”     Thucydides

Share Your Memory of
Henry
Upload Your Memory View All Memories
Be the first to upload a memory!
Share A Memory
Plant a Tree