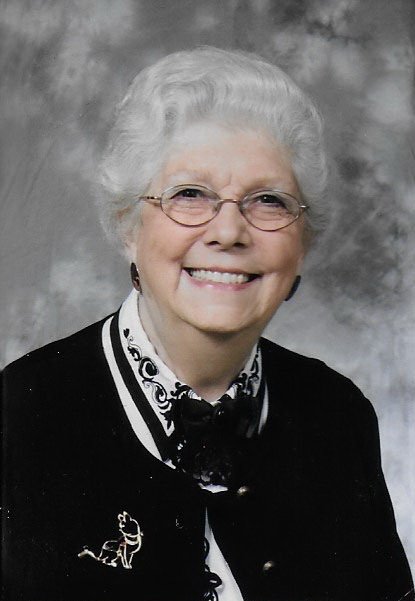 It is with great sadness that we announce the passing of our dear mother, grandmother, sister and friend, Jean Vail, on November 10th.  Jean was raised in Nipawin as the youngest of 4 children to George and Hettie Furneaux, and spent her adult life in Regina.

She has now joined her husband, Bill Vail (2002), son Brian (2015), her parents, her sister Mildred, brother Donald, and many other dear family and friends. She leaves to mourn: her two children (Linda Dodd and Bob Vail), her sister (Kathleen), 6 grandchildren (Kendra, Alison, Valley, Chelsea, Dillon and James), and 3 little great-grandsons (Reign, Austin and Ellis), as well as 15 nieces and nephews.  Jean will be deeply missed by her family and friends!

Jean and Bill were married in 1951 in Regina.  Jean stayed at home raising the children with great love and care.  She supported the family in all of their endeavors, especially their sports and music.  A favourite passion for Jean was the church choir.  She began singing at Carmichael United under the direction of Max Laidlaw.  A great love of singing began at this time.  She sang in the Westminster Choir beginning with Alice MacDonald in 1960, on through other directors including Diane Craig and Tom Magnuson. The Singing Grannies and The 49ers were great loves as well.  She attended her last rehearsal with the 49ers one week before her fall in September.

Though music was likely the activity Jean loved the most she also took great pleasure in the Monday bowling league she was in at the Golden Mile lanes.  At awards time, at the end of every season, she was sure to win some of the top awards.  In earlier years her sports included tennis, badminton and curling but it was bowling that she carried on until around 2005.

In 1973 Jean ventured outside the home for another of her loves, jewelry.  She took a position at McKenzie’s Jewelers, now known as Mappins. She took great delight in showing customers many special items in the store, but diamonds were likely her favourite.  She retired in 1991.

While life was busy Jean also found time for her grandchildren, especially Kendra and Alison as they lived in Regina.  They spent a lot of time with Grandma and Grandpa as they assisted in childcare, transportation and general delivery through the years.  The Calgary grandchildren, Valley, Chelsea and Dillon, and James in Gibsons, BC, also meant a great deal to her.  As the children were active in many activities she was always happy to watch in person or hear about it on a phone call.  The new great-grandsons were a true gift to her.  She got to see each of them this year before they were walking.  They made her smile!!

People in Regina usually know Jean for two things – her singing and her time at Mappins.  That being said some knew her for playing Yahtzee, Rummoli and cribbage but everyone knew her for her sense of humour and her love of cats. Jean will be truly missed in so many ways!

Friends were found in every neighbourhood where they lived including Gladmer Park, Reynolds St., Leopold Cresc., The Canadiana and Mutchmor Lodge.  Coffee time and cribbage with Art, Jenny, Mary, Shirl, or Yahtzee with Lena and Bunny and visiting at Florence’s were part of her days.

Jean enjoyed all family times and special events, which included graduations, convocations, weddings, new business and work, and recently the arrival of great-grandchildren.  Visits from out of town relatives were most welcome!  Trips to Nipawin, Sudbury and Calgary were special too.

A Memorial Service to Celebrate Jean’s Life will be held on Monday, November 18, 2019 at Westminster United Church at 2:00 pm.  Parking is available in the Cathedral parking lot on Cameron St.

Those wishing to make donations in memory of Jean may wish to consider the Regina Humane Society, or another charity of your choice.

Share Your Memory of
Marjorie
Upload Your Memory View All Memories
Be the first to upload a memory!
Share A Memory
Send Flowers