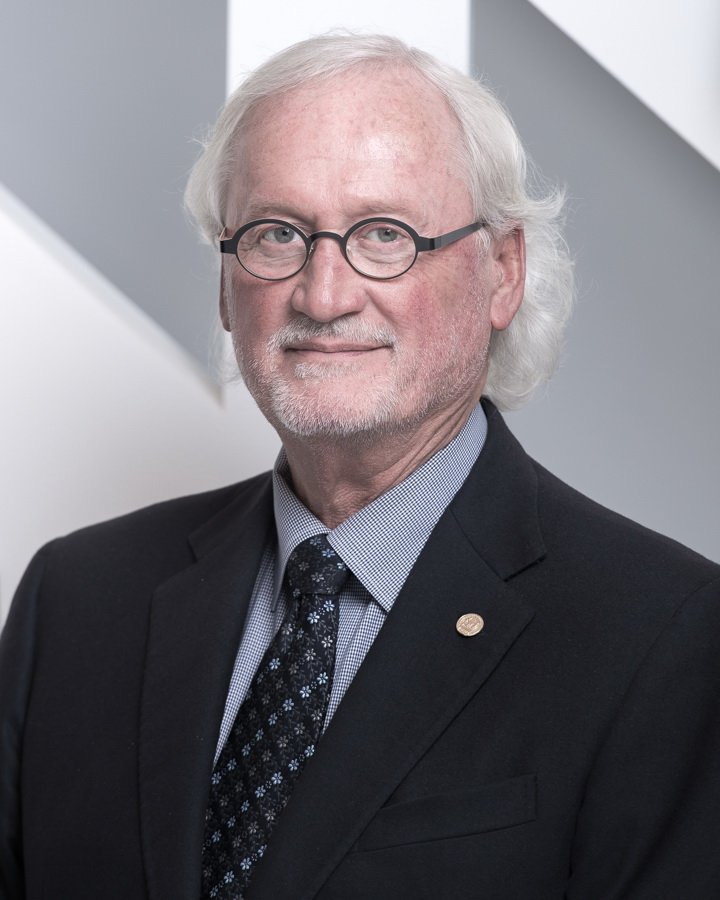 November 12, 2019, the day the music died. Brian Eldred’s dance with destiny halted, music fading to a familiar faint refrain “This’ll be the day……….”. Music to Brian was always a metaphor for life and architecture. It comes as no surprise to Brian’s close friends and family that, he would stare down death with dignity and amazing grace. In Brian’s words “An educational moment for us all!”  A leader in life, a mentor to many and an advocate for Architecture, Brian has left remarkable landmarks on the vast prairie horizon and like the prairie winds has gently touched many lives.

“But something touched me deep inside, the day the music died” Don McLean

Brian was born August 5th, 1941 in Newdale, MB and with family moved to Hazlet and Zealandia SK in his formative years, it was destined that Brian would always be a small-town prairie boy! This was a badge Brian would wear with honour, ultimately, but predictably, practicing architecture and prematurely retiring where his heart was...small town Saskatchewan. A self-made man, of modest beginnings, Brian’s career spanned major cities, territories, provinces, continents and nations. Brian’s career and influence were international in scope and scale but ended where it started, as a modest prairie boy. An architect proud of his good work but the work never eclipsed his pride of family.

Following graduation from high school in Saskatoon, Brian worked as an architectural draftsman for five years before applying for and being accepted to the School of Architecture in Winnipeg, MB in 1965 as a mature student. The fact that he was newly married when he aspired for this lofty goal was early testimony that Brian would never choose the easy path in life. Brian graduated with honours from the University of Manitoba, School of Architecture in 1970, earning the prestigious design award, the Fontainebleau Travel Scholarship to France. An outstanding achievement as the scholarship is only awarded to 15 to 25 students worldwide each year.

Following, Brian’s architectural career began in Winnipeg, MB but quickly transitioned to Africa where he served as resident architect and project coordinator for the new Zambia Institute of Technology. A transformative life experience for this young architect. Upon returning to Canada, Brian practiced in all three prairie provinces completing hundreds of familiar local projects too numerous to mention by name.

Over the decades Brian also served the profession in numerous roles and capacities, at the provincial, national and international level on the councils of and ultimately as President of the Royal Architectural Institute of Canada (RAIC) (1985-86) and President of the Alberta Association of Architects (1986-87). During this period, at the international level, representing the architects of Canada Brian served as an advisor to the North American Free Trade Agreement (NAFTA), negotiating an Architectural sub-agreement, which uniquely was the only professional sub-agreement to NAFTA.

In 1985 Brian was honored, awarded and elevated as a Fellow of the RAIC, followed in 1986 with the international distinction of being awarded as an Honorary Fellow of the American Institute of Architects.

In 1993, faithful to his roots, Brian moved back to Saskatchewan, and as a trail blazer, proved it was feasible to practise in small town Saskatchewan, living, working and contributing to the growing communities, of Birch Hills, SK followed by Swift Current, SK.

Fate found Brian meeting Lynn, his muse in life and architecture who he married in 1998. This has been a transformative life experience for both, ranging from canoeing in Saskatchewan, constructing homes in Nepal, building a business or simply being a nurturing “Nana” or a proud “Papa”.

After his retirement from active Architectural Practice in January of 2008, Brian accepted the role of Vice President, Construction and Facilities Management at CANAD INNS in Winnipeg but returned to Saskatchewan in December 2015 where he continued, in semi retirement, to provide a wide range of advisory consulting services.

Brian’s memory will be celebrated by wife Lynn (Williams), children - John (Nicole) of Swift Current, SK; Stephen (Karin), grandchildren A.J. and Jane of Jasper, AB; Bobbi (Rick) Churchill grandchildren Bryden, Taytum and Tanner, of Wilcox, SK; and Jay (Stephanie) Pow grandchildren Fletcher and Becket of Milestone, SK; sisters - Fay Falk of Edmonton, AB and Sharon Swan of Kamloops, BC and numerous nieces and nephews. Predeceased by his parents Glen and Mae Eldred, brother Ken and daughter Leah in infancy. A Celebration of Brian’s Life is to be held from 2:00 PM to 4:00 PM on Sunday, November 17, 2019 at the Wascana Country Club, Regina, SK. In lieu of flowers, the family would prefer a donation in Brian’s name to the Palliative Care Unit at the Regina Pasqua Hospital.

Share Your Memory of
Brian
Upload Your Memory View All Memories
Be the first to upload a memory!
Share A Memory
Send Flowers