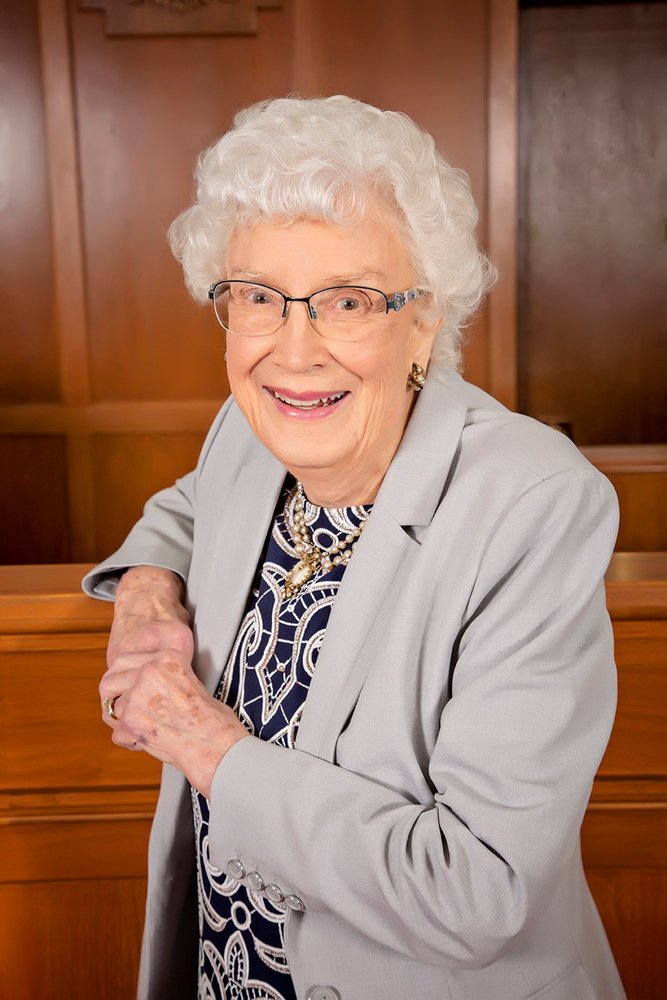 Lorene Beatrice Robertson (nee Cruden) died peacefully at home on October 28, 2019. Predeceased by beloved husband Donald Harry Robertson (October 1, 1925 - January 8, 2008). Mourned by sons, Donald Colin (Maureen Boyd) of Ottawa, Ian Stanley (Lily Schiemann) of Calgary and David Neil (Magdalene) of Regina; grandchildren, Allison, Sean and Conor, Brigitte and Bronté, Sacha and Alice; great grandson Max; younger brother Charles Ewart (Eileen Cruden) of Winnipeg; sister in law Kathryn Violet Condra of Winnipeg and nieces and nephews. Born prematurely on February 13, 1928 to Stanley Dobson Cruden and Susan Beatrice Cruden (nee Fry), Lorene spent the first six weeks in the family's gently-warmed kitchen oven or swathed in blankets in the sunshine. This probably accounts for both her sunny disposition and affinity for warmth. She possessed a keen interest in current events and in later years she lived vicariously through the travels of her progeny. Like her mother, she was a superb cook, to the delight of her husband and sons who enjoyed her bread, apple and banana cream pies and her special bridge meringue torte.  She was remarkably tolerant of her sons who inflicted on her not just a series of dogs but also pigeons, mice, frogs, tadpoles and a chameleon. Her nearly sixty-year marriage to Don was a true love match.  After he returned from RCAF service, they met in Winnipeg at CKY radio which became the CBC. For the next forty years, the CBC would be her only competitor for his affections. She would even the score through long enjoyment of the CBC pension. CBC took them to Edmonton, Toronto and then back to Winnipeg. They spent nearly 20 years living happily on Bathgate Bay where she served as deputy welfare officer for the municipality of Fort Garry. CBC moved the family to Regina in 1973 where Lorene became president of the Newcomers Club. Her work at the University of Regina gave her a perspective on the professoriate. In retirement, Don and Lorene traveled the world covering their progress with pins on a map, square-danced, played bridge, went to church, gardened and entertained family and friends from the backyard deck that she so enjoyed. Lorene possessed a phenomenal memory. A voracious reader, she could consume a book a day and was grateful for the Regina Public Library. A self-described ‘tough old bird’, one of her last outings was to haul her oxygen tank into the voting booth so that she could vote for Ralph Goodale. She liked people and she had great capacity for friendship. She enjoyed a special relationship with each of her grandchildren. For her the glass was always more than half full.  At her request no funeral is planned. An internment with family will be held at a later date.

Share Your Memory of
Lorene
Upload Your Memory View All Memories
Be the first to upload a memory!
Share A Memory
Plant a Tree