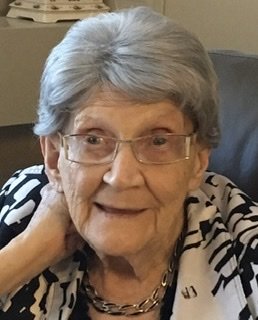 The world became a lonelier place on October 29 with the passing of Ruby.  She passed away peacefully at the Regina General Hospital at the age of 98.  Left behind to cherish her memory are her children:  Trina (Bob) Stephen, Sandra (Glen) Kammer, Colleen Schonhoffer, Maurice (Cindi) Schonhoffer, Marilyn Campbell and Sherry Thurmeier (Ken Lessard); 17 grandchildren; numerous great grandchildren; and one great great grandchild.  Ruby was born at home in Neudorf, SK on April 29, 1921.  She started her teaching career in 1941 in Dysart where she met Frank, her husband for almost 65 years.  In 1945, Frank was discharged from the military and they began farming in the Dysart area until 1953 when they moved to Regina.  While in Regina, Ruby worked for the Department of Social Services until her retirement in 1977. During their retirement years, Frank and Ruby travelled extensively, including Europe, Mexico, the Caribbean, most states in the USA and coast to coast in Canada.  They spent their winters in Florida, Texas or Arizona.  After Frank passed away in 2007, Ruby continued to winter in Arizona until she was 91.  She often joked that the secret to her longevity was that she seldom had to endure Saskatchewan winters during her retirement years.  Ruby loved to bowl in her younger years and was always an avid card and bridge player.  She enjoyed painting, knitting and crocheting and, to keep her mind active, she did crossword puzzles and read.  When she was 80 she travelled to Australia alone and also bought her first computer.  Because Ruby outlived most of her friends and relatives, her wish was to have a private graveside ceremony in the spring with her immediate family.  Her ashes will be buried with her beloved Frank and twin daughters, Marie Jeanne and Marie Jacqueline, who died in infancy. The family thanks everyone who was kind to Ruby during her last days.  A special thank you to Brenda Rodko for always taking the time to keep family ties connected.

Share Your Memory of
Ruby
Upload Your Memory View All Memories
Be the first to upload a memory!
Share A Memory
Plant a Tree