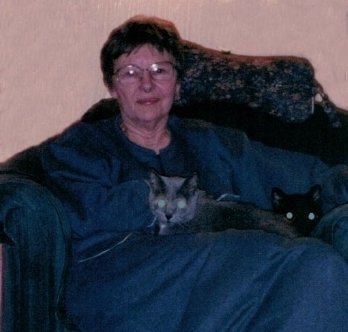 As a youngster, Lil was nicknamed "Lily" by her grandfather and after that, the name "Lil" stuck for the rest of her life. Lil was born in Carman, Manitoba and her formative years were spent in Morden, MB. After completion of her high school education there, she commenced her long standing career in the Insurance Industry which began with Great West Life in Winnipeg, MB. Lil and William T. McLean, R.C.M.P. officer, were married in 1954 in Regina, SK. They both came from Morden, MB, where they went to school and grew up together. He was one day older than she was. While they had several happy years together and made many friends, they eventually drifted apart and opted to paddle their own canoes. They had no children although their pet cats always formed a significant part of their household. Lil never remarried. Lil's work history after her move to Regina, consisted of a few years in the Finance Dept. at the Provincial Legislature, followed by many years in the Insurance Industry until her retirement. Lil was very much a community minded person. She was an active participant in so many areas for as long as her health permitted and was a strong advocate for others who needed it. She touched many people's lives. Of special importance to Lil was her church involvement, and her pets. Lil faced the many medical issues in her life head on and there was never any doubt that She was the captain of her ship. Lil’s memory will be cherished by her family and friends. A Celebration of Lil's life will be held at 1:00 p.m. on Saturday, October 5, 2019 at First Presbyterian Church, 2170 Albert Street, Regina, SK with Rev. Bob Wilson officiating.

To send flowers to the family or plant a tree in memory of Velma McLean, please visit Tribute Store
Saturday
5
October

Share Your Memory of
Velma
Upload Your Memory View All Memories
Be the first to upload a memory!
Share A Memory
Send Flowers