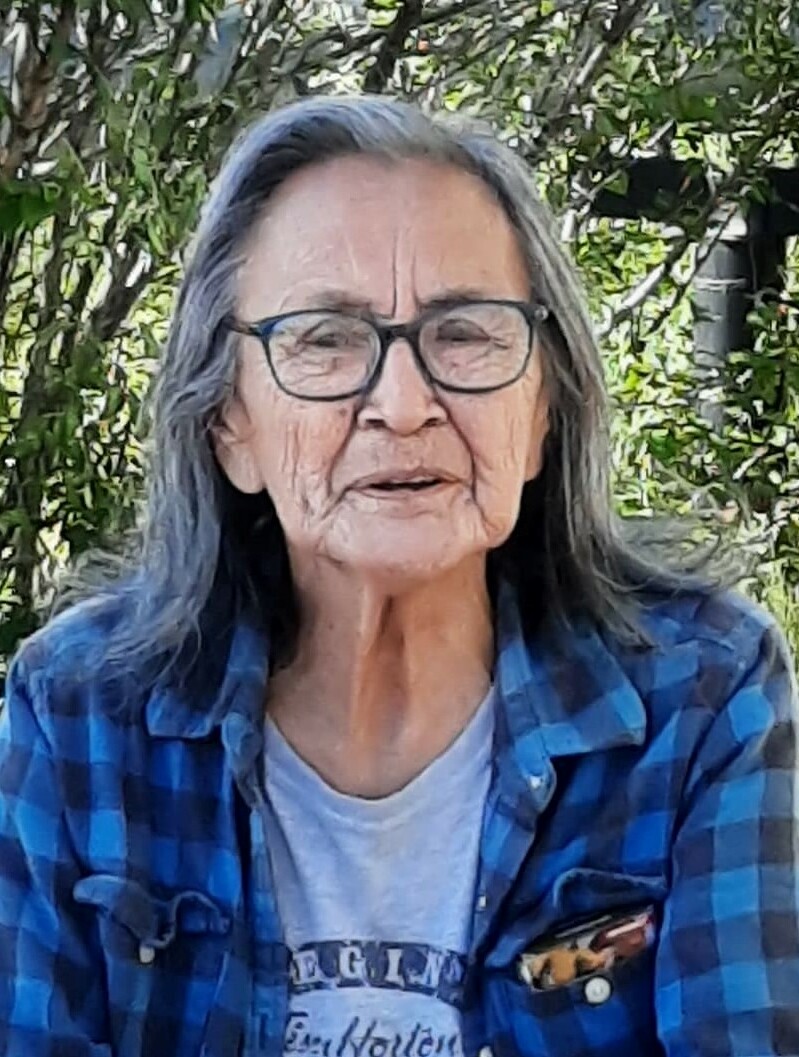 Please share a memory of Mildred to include in a keepsake book for family and friends.
View Tribute Book

On Thursday, November 29, 2022, my beloved Mom, Millie Anderson passed on. We have lost one of the strongest women we have come to love. Millie was the eldest daughter of Olga and David Roland. She was predeceased by her husband Jim; grandparents Amos and Susie, and Alice and Aghaluk; parents; and brothers Edward and John. Left to mourn her passing are her children Gordon, Jerry, Douglas (adopted by Olga and David) and Roseanne (Arthur); grandchildren Avery and Jaimesyn; siblings Mary, Floyd, and Cecilia; as well as numerous nieces, nephews and cousins. Millie was most proud of her granddaughters, Avery and Jaimesyn. She never hesitated to tell you all about her children and her grandchildren. Millie’s favourite pastime after that was perfecting her craft, her beadwork. At any given time, Millie could be found in front of her television with her beadwork in hand creating beautiful moccasins, mukluks, mittens and beaded lanyards. She passed on this knowledge to niece, Starlene Elias, daughter of her cousin, Audrey Harley.

Millie was born in the northern part of the Northwest Territories in 1944 to OIga and David Roland. David was a reindeer herder and they traveled and lived throughout the Mackenzie Delta until 1963 when they settled in Inuvik. Millie had three boys, Gordon, Jerry and Douglas who still live in the North with their families. Millie had many interests, she worked as a cook on the oil and gas rigs, she was a bouncer, she worked in the hospitals in Inuvik, she drove taxi, she was a courier, and was a housekeeper, just to name a few.

Millie eventually met Jim when he worked on the construction of the Dempster highway in the North and they settled in Regina, Saskatchewan where her daughter Roseanne was born. She was grateful for family who ended up living in Regina too, Agnes (Ken) Kraemer and their children. Millie lived with Roseanne helping with the care of her grandchildren and made a point to head back up North as much as she could. On one of her last few trips, she was excited to go whaling with her family back home.

Millie was a very social person who could light up the room with her laugh and would talk to anyone and everyone. In fact, she was incredibly proud of her role as Elder at the First Nations University of Canada - Regina Campus. Millie was the Beading Elder and truly enjoyed meeting all those who attended her classes to learn her craft. Millie loved meeting and getting to know each of her students and helping them in any way she could. Millie met close family friend, Bettina Schneider while out walking in her neighborhood and striking up a conversation with Bettina. That led to a beautiful friendship and eventually her role as Elder.

Millie made friends wherever she went, she could be heard laughing from across the room, and her kindness was felt by many. She was an incredibly generous person and helped people in any way she could. In the last year, she moved into a seniors’ complex and made so many friends in a short period of time. Millie could be found helping with the monthly suppers that were put on, she enjoyed the planned events and the nightly card games and shuffleboard and Tuesday night bingo, and visiting with her friends. She thoroughly enjoyed ribbing any Saskatchewan Roughrider fans, as she was an Edmonton Eskimos fan and she made sure any and all Rider fans knew.

Millie was special to many people, so many that I don’t even know how to start listing them here. She had many loved ones who were family and close friends both here in Regina, and across the NWT. She also held many people close to her heart and I would not know where to start to list you, please know, she loved and admired many people and if I did not mention you, it does not mean you were not special, I just don’t know where to start. She cherished her relationships with her nieces, nephews, cousins, and friends who became family. She especially held those who attended All Saints Residential School in Aklavik with her in her heart.

She will be deeply missed by so many. There will be a viewing at 2:00 p.m. on Friday, December 2, 2022  at Paragon Funeral and Cremation Services, Regina, SK and a small service will be held at 11:00 a.m. on Tuesday, December 6, 2022 at Cedarwood Manor, 1510 Broadway Avenue, Regina, SK with Reverend Carla Blakley officiating. A private family interment will be held in the late spring as per Millie’s wishes.

Share Your Memory of
Mildred
Upload Your Memory View All Memories
Be the first to upload a memory!
Share A Memory
Send Flowers
Plant a Tree